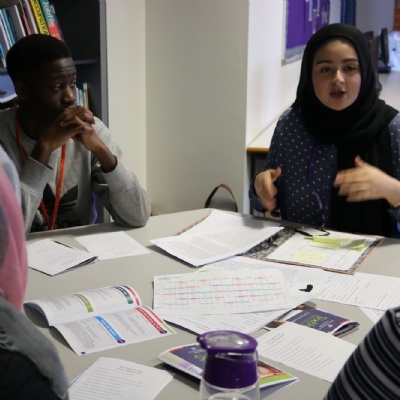 It was an action packed day for year 11 pupils at Nottingham Academy yesterday.

As part of our Supporting Success Day, pupils took part in workshops and listened to motivational talks to prepare them for the world of work.

We had some great speakers including David Keeling, Harun Rabbani and Liz Radice.

David Keeling, a stand-up Educationalist, spoke to pupils about the art of memory and finding different strategies to remember things. He showed the class magic tricks to explain different memory techniques he used.

Harun Rabbani, a speaker from London, gave a talk based around emotional resilience and ways to achieve personal goals.

An interactive workshop was held by Liz Radice, an outreach officer, from the University of Nottingham.

Each group of pupils was given a worksheet with company logos on and pupils had to explain what techniques they used to remember which logos belonged to which company.

There was also great teamwork between the pupils and staff from HMRC, who volunteered at the event. Pupils explored ways to improve their mind sets. Each group came up with some really positive suggestions.

Our Sixth Form students also got involved with the day, by talking to year 11 pupils about sixth form options. They gave some great top tips on future prospects and how to handle interviews.

Some year 11 pupils, who are considering college and apprenticeships, had the chance to research different courses. Some of these included languages, plumbing and engineering.

Check out our gallery to see more pictures.