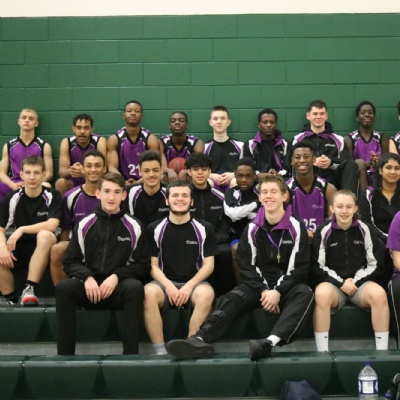 The Academy is back in full swing with two fixtures over the last weeks and 3 fixtures this week.

The Academy is back in full swing with two fixtures over the last weeks and 3 fixtures this week.

Last week saw the U'19 Men travel to Sheffield College.  With several of the starting five missing due to exams some of the Year 12's were required to step up.  Sheffield were much stronger than the first game of the season and put pressure on the Academy early on.  However the U'19's responded well, fighting back and taking the win 72 - 69

The Women did not have a game but Brahe Ashton, Caitlyn Riley, Ines Guerreiro and Mariam Olawoyin represented the Academy at the National 3 on 3 finals.  The girls played 3 games, losing to eventual runners up Barking Abbey by two in a tense affair which could easily have seen them take the win.  In the second game against Oaklands College the girls took a loss.  However in the placement game against Coppleston High School they got back to playing really solid basketball and a took a strong win to finish the competition.  Mariam was the only non sixth former in the competition and did not look out of place at all it should be noted!

This week we have 3 fixtures:

On Tuesday 16th the U'16 Boys won their game in Shrewsbury.

Today,  Wednesday 17th Jan, the U'19 Women are in London to face Greig City Academy, while the U'19 Boys travel to North Tyneside to face Tynemet College.