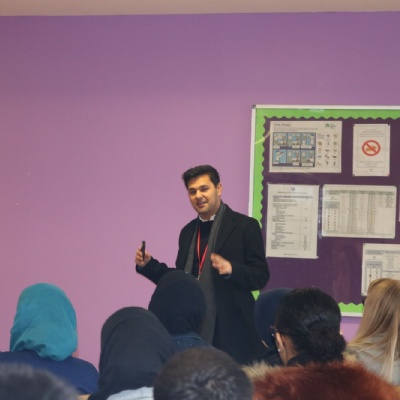 A programme of inspiring talks by global companies was held for Sixth Form students to prepare them for the world of work and further education.

The day was hosted by Young Professionals, a company which aims to bridge the gap between young people and potential employers, as well as educate students about apprenticeships.

Young Professionals was set up by Dan Miller, when he was just 17-years-old.

Dan, who is from Derby, said: “I went straight into the world of business instead of going to university.

“I approached Rolls Royce and explained to them that I wanted to help young people get into work.

“A week later, their HR department contacted me and they offered £4,500 towards my business.”

Almost four years later the company has gone from strength to strength and is now worth £1.2million, with offices in Nottingham and London.

The company has created an app which allows young people, who are looking for work experience, apprenticeships or graduate jobs, to connect with companies.

Throughout the day, Sixth Form students listened to talks from Dan Miller who showed students how to use the platform.

There were also talks from other companies including Ernst Young, Browne Jacobson, Geason, Experian, Roythornes Solicitors and BDO.

Students learned about interview and CV techniques and routes into graduate schemes and apprenticeships.

Check out our gallery to see more pictures.